With is not a conjunction

Using ‘with’ at the start of a sentence has traditionally been regarded as ‘weak’ writing. Writers also need to be wary about joining sentences by using ‘with’, as:

‘With is not a conjunction’.

That bold statement is a section heading in the Australian Government Style Manual.

However, many people do use ‘with’ in this way, so I’ve been getting on top of the subject.

What is a conjunction?

And, but and so are all conjunctions. They link two parts of a sentence together, generally after a comma.

✅ Jamie travelled to the UK last year, 𝗯𝘂𝘁 he has been unable to get home again.

✅ Sally had a slight fever, 𝘀𝗼 she stayed away from the office.

❌ Asha came top in her year, 𝘄𝗶𝘁𝗵 straight-A grades in every subject.

There are a gazillion good and proper uses of ‘with’ (✅ I am coming with you to town), but a conjunction is not one of them.

Instead, reword or split the sentence:

❌ Fire seasons have been more severe, 𝘄𝗶𝘁𝗵 the 2019–20 summer the worst in Australia’s history.

❌ 𝗪𝗶𝘁𝗵 fire seasons more severe, the 2019–20 summer was the worst in Australia’s history.

✅ Fire seasons have been more severe. The 2019–20 summer was the worst in Australia’s history.

Get in touch if you’d like help making your writing clearer or more grammatically accurate. 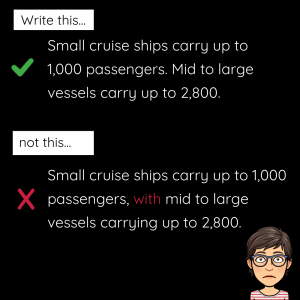